It’s hard to imagine anything more romantic than a South of France honeymoon. With the best art, poetry, fashion, literature, food, culture, and fine wine, one could say that romance was born there. But, it’s fairly easy to not quite comprehend just how many options there are to experience.
The beautiful thing about the South of France is not having to compromise like some Mediterranean honeymoon destinations. You get the best of both worlds with stunning beach resorts on the beautiful French Riviera, and relaxed living as you head inland. This destination truly has a little bit of everything for all tastes.

Read on and you’ll discover all of the majestic sights and scenes you can encounter and our guidance on how to plan for the trip of a lifetime and start your new marriage wrapped in love.

How To Plan the Most Romantic South of France Honeymoon

Write essential tips: what to take with you, best season to travel, where to stay, language, national currency.

France is the second largest city in Europe with something to stimulate your senses around every corner. In order to make the most of your France honeymoon, it’s best to make a plan. You’ll need a checklist of where to go, where to stay, and some local necessities to keep you moving smoothly and without stress.

It’s best if you can find some balance. Winters are cold and summers are bombarded with tourists. Choose your date in either the spring or fall. You’ll have a little bit of elbow room and still get to enjoy comfortable weather.

Since there is so much to do and see, we can’t recommend that you stay at the same place for your entire stay. Instead choose an assortment of the best places to stay in South of France.

Of course we encourage you to visit many more places, but these 3 will give you a healthy mix of what France has to offer. Also, 5-Star accommodations are unforgettable, but feel free to dial it down a notch to make room in your budget for more activities.

Most tourist-heavy destinations, such as Paris, will be able to accommodate English. If you really want to indulge in the culture, you’ll have to start brushing up on your French. Most of us have studied Spanish in high school and, after a few lessons, you’ll find that French is very similar. The endings of the words are different, but the route words and sentence structures are almost identical. You can do it!

A few Parisian places will take US dollars, but you’ll be completely out of luck at a bistro in Loire Valley. Be safe and convert your dollars to Euros, which is the nation’s currency.

This past Olympics taught us that it’s unusual to smile at strangers for Russians. Not true in France. In fact, everyone is super positive and super polite, so be prepared to issue a boisterous Bonjour! to those you encounter, and look them in the eye as you shake their hand.

If you make friends, a few light kisses on the cheek is ordinary. The number of kisses differs greatly from region to region, so let the local lead.
Adding ice to your drink is an American thing. Don’t bother asking for any because it’s unlikely that they’ll have any on hand, but it is likely that you’ll get some odd looks.

Don’t lift your fork (with your left hand of course) until you hear the ceremonial Bon Appetite, and eat slowly so that it’s clear you’re enjoying your meal. If French fries are on the menu skip the ketchup and ask for a side of mayo.

Most of this is forgiven if you can’t keep it all in order, France is very familiar with tourists. But if you want to blend in, these are the rules to follow.

It’s nearly impossible to enjoy everything that France has to offer in one single city. We recommend planning for multiple South of France destinations. We don’t want you flying all over the country, so we’ve strategically picked destinations that are close together and offer some great romantic honeymoon ideas. 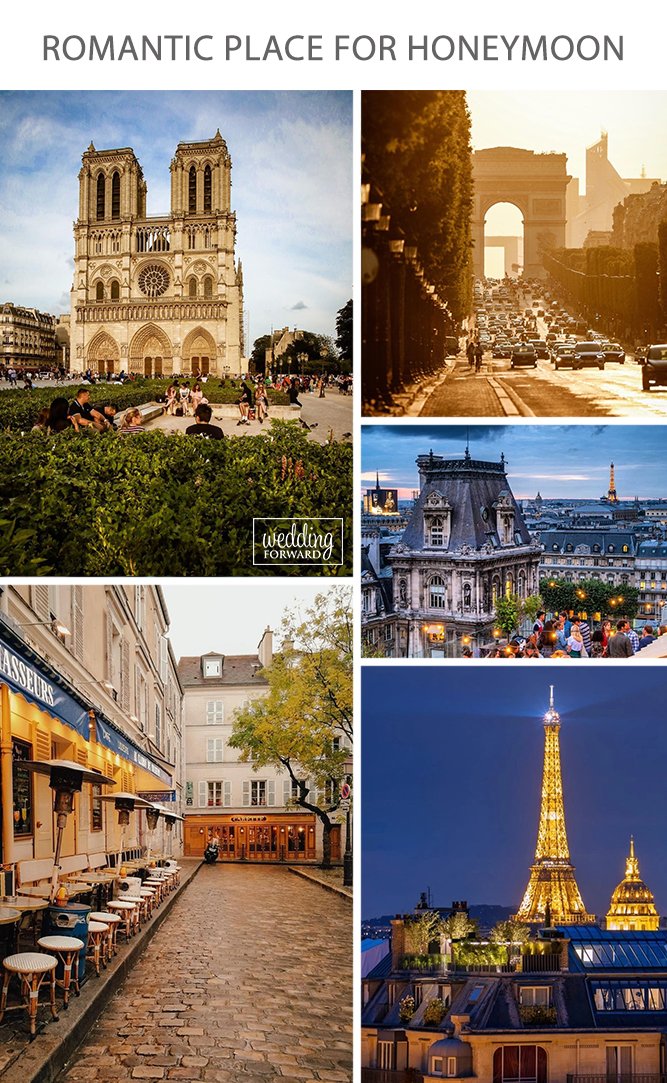 Step off the airplane and onto white beaches dotted with blue umbrellas. After you bask and tan on the shores and Southern France beaches off the Mediterranean head to the city through engaging architecture rich with gardens, fountains, and parks.

After some Nice relaxation make your way across the coast to arrive in Saint-Tropez, your nightlife destination. Let your night evolve as you move from Mansion-courtyard cocktails to ‘just like when you started dating’ all night dancing.

Find out what the rich and famous have been raving about on the Cote d’Azur for your next stop. The French Riviera offers far more than movie awards. Indulge in the finest food at pastel-colored bistros and soak in the golden sunshine bouncing off of clear turquoise waters.

The country’s capital needs no introduction. If you’re planning a visit to France, the museums, architecture, and overall culture of Paris is an absolute must. Finish you day by watching the sunset from the Eiffel Tower to maximize the romance.

What’s a trip to France without experiencing wine country? Enjoy your days strolling through villages you thought only exist in fairytales. He calls you his princess, have him prove it with by visiting Chateaux Chenonceau, one of the most famous castles in the world.
Source: Kevin and Amanda, Versa Versa Photography, deific us art You’ll still enjoy your south of France honeymoon if you stick to one locale, but you’d be missing out on so much. Follow the path of destinations we’ve laid out and you’ll get to experience a little bit of everything that France has to offer, and don’t forget those local customs!