You’re reading this because you’re in search of alternative wedding ceremony ideas. I walk down the aisle followed by traditional wedding vows for many couples, but for future brides and grooms from non-Catholic backgrounds or upbringings there are more options than you probably realize.
We’re here to introduce you to a few wedding unity ideas that are unique, fun, romantic, and definitely won’t be found in Disney movies. The unity candle ceremony is one of the most meaningful moments of the wedding ceremony. It symbolizes the joining together of two separate lives as one. It has its origins in Judeo-Christian faith but has become a part of secular weddings over the years. Sand wedding ceremonies are the perfect alternative for those who do not wish to use a unity candle. They are a great option for an outdoor wedding where lighting a candle might not be possible. In a sand ceremony, the bride and groom each take a different color of sand and take turns pouring them into a glass bottle or vase. You can also have other family members join in on the sand ceremony.

The colors of sand are entirely up to you. A lot of couples use sand from a place that is meaningful to them. This could be a favorite childhood beach or a place they vacationed as a couple. The sand then blends to become one. You would proudly display the sand vase or bottle in your home as a symbol of your love. Remember to add collecting your sand to your wedding list to do.
Source: In Tandem, KT Merry, Grace photography If you are looking for an alternative to unity candles or sand ceremony, you can create your own spice. As a couple, you would choose up to seven spices that symbolize your dreams and hopes for your marriage and blend them into a special glass bottle. For example, paprika symbolizes passion and nutmeg, romance. You would then later use the spice for cooking as a married couple.

Similar to the sand ceremony, you would blend together two separate colors of water to form one color to symbolize your marriage. It is recommended that you experiment with different colors beforehand.

The first unique wedding ceremony idea to get familiar with is God’s Hand. This ceremony has its roots in Celtic tradition and has a clear connection with God.

Ecclesiastes 4:12: “Though one may be overpowered, two can defend themselves. A cord of three strands is not quickly broken.”

This is a great wedding ceremony option for couples who are looking for something a little less religious and a little more spiritual, but still want to satiate a few key wedding guests.

The ceremony is simple. Using 3 lengths of rope, ribbon, cord, scarf, or fabric from a family heirloom, the couple holds opposite hands. The strands of fabric are braided together, symbolizing man, woman, and God. The officiant wraps the couple’s hands and wrists, binding them together and inviting God into their relationship.

This is very likely the origin of the term “tying the knot”. Handfasting is one simple step away from God’s Knot. This unique wedding unity idea carries the same sentiment as God’s Knot, but removes the Christian aspects.

The origin of this practice is the culmination of many ancient (mostly Pagan) European cultures. This means that you can believe in one god, multiple gods, Gaia, elemental spirits, or no god at all, and it will still carry the same significance.

Hand tying is a symbolic gesture that physically binds the couple together as two people following one path together. It unites the body as well as the soul.

Due to its origins, hand tying if currently very popular with followers of pagan and wiccan beliefs.

You could have a special wooden puzzle created to symbolize you’re joining as a blended family. You would then assemble the unity puzzle together as a family during the wedding ceremony. Make sure to include symbols of unity.

You could either plant a tree a family during your wedding. Or perhaps you could each gather family photos and other things that symbolize family and make a “family tree” collage as part wedding ceremony. Both of these are cool wedding ideas that involve the entire family.

You could ask guests to bring pictures of the two of you as part of your gift registry ideas. During the ceremony, you could add these photos to your family tree or album.

As a family, you could take turns painting a canvas during the ceremony. This would symbolize the blending of your families. You would then proudly display it in your family home. Even if you grew up in a Christina, Jewish, or Muslim household, there’s no denying that the Native Americans nailed the connecting with nature portion of spirituality.

This wedding ceremony unity idea begins by wrapping the bride in one blanket and the groom in another, both blue. This represents their individual past lives. The couple are then both wrapped in a single white blanket symbolizing peace and happiness.

If you’re Native American you’ll probably be more fulfilled doing things by the book. If you’re simply looking for alternative wedding ceremony ideas that involve nature and the elements, feel free to adapt this to your personal expectations of a marriage ceremony.

Fire has been a powerful symbol throughout human history. Fire purifies and represents change, illumination, and enlightenment.
The lighting of unity fires are wedding ceremonies ideas that have permeated Christianit, Paganism, and Native American – to name a few – cultures, but they all hold a common theme.

A candle or large outdoor fire is lit simultaneously by the bride and groom. It’s quite common to include vows and Ceremony music. The end result is evoking the symbols mentioned above into your marriage.

If you’re going with the Native American route, there are specific tasks to keep in mind. The high side of the fire should be built with stone, and the logs that hold the fire should be cut from 7 types of specific trees. Two smaller fires are also lit to represent the single lives they once led.

Unlike the other ideas for wedding ceremonies, this unique ceremony isn’t inspired by ancient traditions. It’s new.

A time capsule involves the couple placing items from their courtship and wedding – we recommend currency from countries you’ve visited, your wedding program, a newspaper from your wedding day, photographs, a menu from your first date’s restaurant, music, etc..) into a box that’s buried and dug up on a significant anniversary.

Today’s couples not only want symbolism, they seek engagement. That’s exactly what you’ll get with a time capsule wedding ceremony!
This isn’t a common wedding ceremony idea, so if you’re searching for new and exciting to impress your guests with, this is it. Many couples use drink ceremonies for unique wedding ceremony rituals. These include, but are not limited to unity tea ceremony, wine ceremony and many others. Make sure to keep track of these in your detailed wedding budget checklist.

In this ceremony, you would blend together two wines into a wine bottle. This symbolizes the blending together of your love. It also symbolizes that like a fine wine, marriage takes years to fully mature. You would then open the wine on a special anniversary. Most couples chose to blend a fine white and red wine together for their wine ceremony.

As an ancient Chinese wedding tradition, you would both choose your favorite blend of tea or one that represents you. During your ceremony, you would mix the two together and then drink it. You could also invite your guests to take part in this tradition.

If you aren’t a fan of fine wines, you could barrel a whiskey instead. You would each choose an unaged whiskey and funnel them into a personalized mini whiskey barrel. You could also do the same with gin, beer or another alcoholic beverage of your choice.

Add Some Green To Wedding Rituals If you are eco-friendly, you could honor one of the timeless but unique wedding traditions or be planting a tree, plant or flower. You would both gather a bucket of soil from a place in nature that has a special meaning. You would then choose the type of tree, flower or plant that you wish to use for the ceremony and acquire a seed (or seeds).

During the ceremony, you would both take turns adding the seed(s), soil and water to the pot. You would then take the pot home. You could plant it in your yard. Flowers or a plant you could bring inside.

Following is an example of some seeds and their meaning: Create Your Own Special Ritual

Of course, you don’t have to use the aforementioned types of rituals. As a couple, you could come up with your own creative and unique wedding ceremony ideas. Following are some examples to help inspire you! Who says you have to stick with tradition? Where you decide to go with mrs or miss as your married name, or just keep your own last name – the choice is yours. Everything about your wedding should be personalized and special to the two of you as a couple! 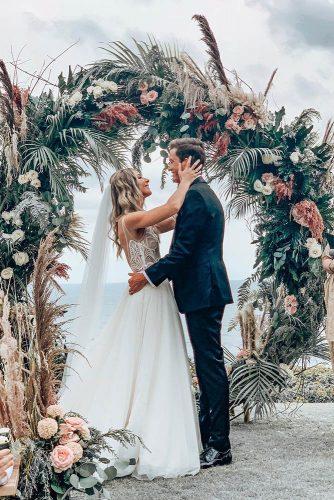 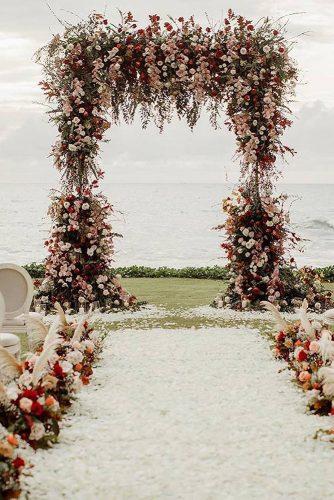 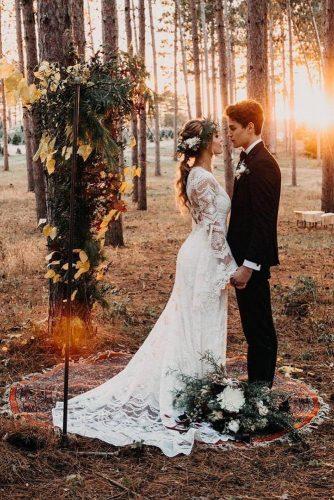 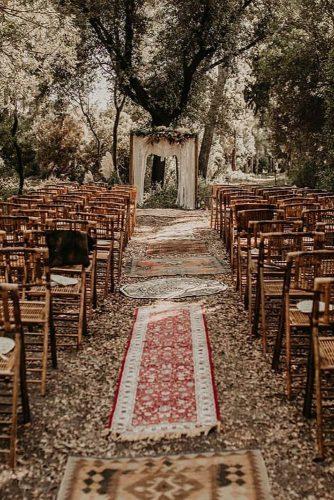 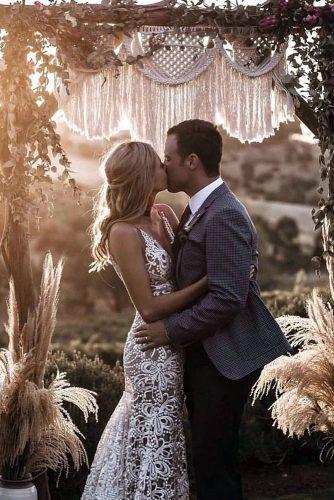 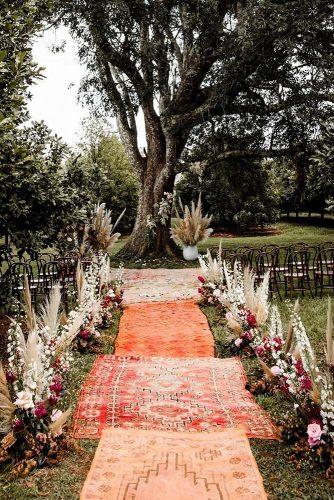 What influences you? A being higher than yourself? Nature? Symbolism?
Encorporate what matters most to you, and don’t be shy about altering a few traditions to suit your personal style. Do this and you’ll land on the perfect unity idea for your wedding!