When it’s time to get down on one knee, it’s not just a question you’re popping. You’re about to deliver an experience she’ll remember for a lifetime. Every milestone is enhanced with a soundtrack, so it’s about time you check out some proposal songs and plan the perfect backdrop to the big event. 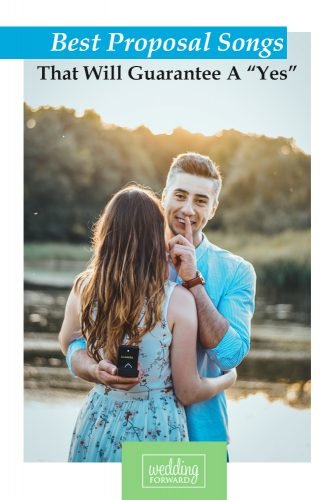 1. “Better Together” by Jack Johnson

This throwback is adorable. If you analyze the lyrics of the best proposal songs, like this one, you’ll find that the overall theme of the song speaks to finding joy with the small things in life. Something as simple as a drive to the grocery store can be transformed into something majestic when you’re with the one you love.

This next entry is a 90’s RnB staple, and for good reason. It doesn’t bury the concept of love in metaphors, like most great wedding proposals songs it shouts love from the mountaintops. This is an exceptionally good choice for a perfect proposal because it embodies how a man should feel about his bride his entire life.

Tay Tay is famous for her breakup songs, but not this one. This is one of the perfect songs to propose because it paints the picture of a journey. Most relationships aren’t ‘love at first sight’ followed by marriage within a few weeks. This song reminds couples of how they met and everything they’ve been through.

A lot of couples have had a few bumps in the road throughout their relationships. Maybe someone objected to the relationship or maybe there was a point in time where some doubt was involved. Either way, this is a top proposal song as well as an anthem indicating just how relentless the couple’s love is.

This song to present the ring box is cheerfully literal. This marriage proposal song proves that you don’t have to use poetry to be romantic. Sometimes all you need is to be direct and honest, 2 very important factors to a successful marriage.

6. “Grow Old with You” by Adam Sandler

There’s nothing more romantic and memorable than a grand gesture. The second that the first lines hit you can’t help but picture Adam Sandler professing his true feelings for Drew Barrymore. Not only that, the lyrics don’t focus on beauty which could fade. They focus on a lifetime of happiness.

There’s not much that’s more powerful than a song about a man who dedicates every second of his life to making the special woman in his life happy. Playing this song while you propose will demonstrate that you want to be that man to her, and she’ll love it.

Sorry Beyonce, we know you’re responsible for this delightful song but John Mayer tones it down in a way that’s perfect for a proposal. New music that features calm and quiet lyrics is a great choice because they’re complementary as opposed to loud songs that step in as the main event.

9. “Can’t Help Falling In Love With You” by Elvis Presley

Be careful with this song. It’s incredibly romantic and has the power to bring most people to tears. But, tears of joy could be exactly the outcome you’re hoping for. If that’s the case, this could be your best song to use for the proposal.

It doesn’t matter what generation you’re from. Everyone loves the Beatles. This song has almost a childish beat and very simple lyrics, but they’re powerful. This engagement proposal song is great for couples who make each other feel like kids and look forward to growing grey together.

The perfect song to propose to has a few rules to follow. It shouldn’t replace or distract from your speech, it should hold a special meaning to one or both of you, it should be positive in nature, and it should reflect your relationship’s personality,
It’s tough to find all four of these criteria in a single song, but if you manage to check most of these off of the list it’ll be a home run. She’ll definitely say Yes!